Are they a 2nd place choice to Saltwater Marine Aquariums?

Many moons ago, when I was young, all we could afford were freshwater biotope aquariums. Besides, at that point, over 55 years ago, saltwater aquatics for the hobbyist was still in its infancy so that even if you had the dough the chances of success were slim. But I must admit that my buddy’s and I did fantasize about keeping a marine tank with all its colorful and exotic fish. When visiting public aquariums and seeing the marine displays with very little space given over for freshwater displays, I really felt that I was at the bottom end of the hobby.

As I matured and gained more expertise in all aspects of freshwater aquatics, I came to realize how wrong I was. I started seeing and learning about all the more exotic freshwater fish that definitely rivaled the wow factor of saltwater.

African Cichlid’s with all the varied species of lake Malawi peacock’s, tropheus, frontosa, protomelus, mbuna and the list went on and on to include endless fish from the big three African rift lakes of Malawi, Victoria and Tanganyika. Then I became obsessed with all the amazing and colorful rainbow fish from Australia and New-Guinee.  I joined the then tiny rainbowfish study group headed by the now well-known expert Gary Lange. We read every published article from the famous Australian fish collector Dr Gerald Allen. I was one of the first people in the US to own a praecox rainbowfish. I just kept moving on to more and more specialized freshwater exotics and completely abandoned the notion that saltwater was where it’s at.

At some point I became totally absorbed by the live planted aquarium field. I collected many aquatic plant species and learned about the requirements needed in order for them to thrive in the aquarium environment. Some of my freshwater planted tanks would have guests starring for hours at their beauty and complexity. Oh, I had so much fun and wide-eyed valuable experience learning and being a part of the freshwater aquatic world.   Even today where I am equally experienced in the marine aquatic world and have installed literally hundreds of aquariums of every stripe size and color as the owner of a successful aquarium design and installation company, I still am fascinated and mesmerized by the freshwater aquarium when implemented correctly. Professional level freshwater aquariums have a certain grace not easily replicated in the in-your-face design of its saltwater counterpart.

So please have a look at the pics on this page, all taken by us here at aqua creations, from our client’s tanks, and you be the judge…. 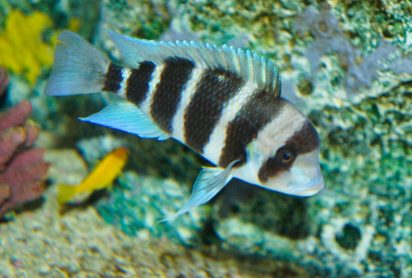 African Cichlid’s, as represented here by the Electric Blue Ahli and the Lake Tanganyika Frontosa, are beautiful and relatively easy to keep. The variety of species available to the hobbyist are virtually endless.

Central American Cichlid’s as represented here by the stunning red-severum and veja-sysnspylum are large show stopper’s that easily rival saltwater fish in both their color, grace and personality.

Roseline sharks are in the barb family and are absolutely stunning when kept in a school of five or more. The brilliant flash of red and their elongated shape are a great contrast dither fish for any community freshwater aquarium.

The Albino Threadfin Acara is a class action fish. It is even more standout when kept in a dedicated species tank in groups. It has a very peaceful disposition and once acclimated to its environment is not difficult to keep.

Discus are arguably the pinnacle of the freshwater experience. They require pristine water conditions along with higher water temperatures to thrive. The results are way worth it, as you can see by their breathtaking beauty.

We haven’t even touched the surface of what’s available out there for the aspiring freshwater hobbyist. But I do think that I’ve made my case for a resounding “NO” when asked if a freshwater aquarium when done right takes second seat. – Sol